We're so busy talking about stuff that can change colors, but no one mentioned the possibility of this.

Agreed. Long overdue. My only criticism is that they should really stop using the Michigan Avenue video feed as a backdrop. There’s a thousand different options available to use. Be creative!!! 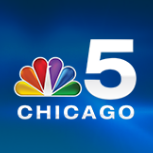 Definitely a nice facelift and FINALLY a new desk. I cannot tell if its a video screen one or if that NBC Chicago logo is physically on it. I don't like that they used the NBC Chicago logo . It looks