The Suicide of CNN.."Goodbye Cruel World." 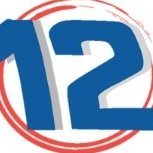