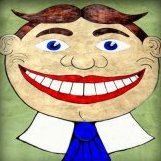 Seeing these designs, a few of them my own,  reminds me that the 80's were a very interesting time for set design, I remember my first gig at G&G in 87'...I was the first TV News set designer to u

Back in the 90s WFSB, WAGA & WITI whomever was the designer had the same idea/concept. The anchor desk and some of the paneling backdrop.