Here’s a look at the updated graphics. The MSNBC Reports graphics are consistent across anchor, but with custom photos for each.

Ann from Parks and Rec is going to run MSNBC??   Oh....different person. 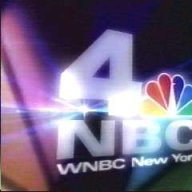