In terms of career progression, one would not go from anchoring a broadcast at WABC to anchoring World News Now. It pays less and the hours are worse. If anything, you sometimes see the opposite - Liz 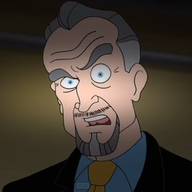