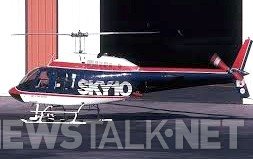 Share Followers 0
The first Sky 10 circa 1979. In those days the camera was a RCA TK-76 and the camera person shot handheld. The door was often removed to allow the camera person to stand on the skids while"clipped in" to the frame of the chopper. The microwave antenna was deployed at take-off manually by the pilot. Unfortunately the pilot landed on the antenna a few times. This was before the days of troll pods. In later years....and later pilots a better antenna was devised that reduced that problem.
Share
Followers 0

There are no comments to display.